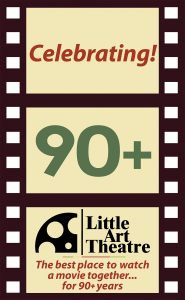 The best place to watch a movie together.

To provide an experience that entertains, informs and inspires.

The Little Art Theatre is among the most recognizable and beloved landmarks in Yellow Springs. Well known for its commitment to diverse programming that includes first-run independent and foreign films, documentaries, cinema classics and special film events, the Little Art is part of the social fabric of the Yellow Springs community and the Miami Valley area. Established in 1929, the Little Art became a nonprofit organization in 2009, and completed its first major renovation in 2013 that brought the theatre into the digital age, but retained its iconic houselights and beloved marquee.

As “the best place to watch a movie, together” the Little Art Theatre provides experiences that entertain, inform, and inspire in an intimate hometown, single screen setting that cannot be replicated at the multiplexes.

Additionally, the Little Art hosts community events, including a New Year’s Eve celebration. Other community collaborations include hosting area filmmaker’s or student film premieres and partnering with local nonprofits such as the 365 Project, Community Solutions, Tecumseh Land Trust, NAMI-YS, and WYSO to bring important documentaries to the screen. Our reach extends to the greater Miami Valley, including hosting screenings for the annual Dayton Jewish Film Festival.

The Little Art is also available for people to rent for their own special events and celebrations including anniversaries and birthdays.

HISTORY OF THE LITTLE ART

In 1929, Dick and Mary Denison founded what was first called “The Little Theatre.”

The theatre was integrated peacefully in 1942 when students from Antioch and nearby Wilberforce University staged a sit-in, planned with the help of Antioch faculty Jessie Treichler, Thomas Dowdell, and Herman Schnurer. The signature Art Deco murals mounted over the house lights in the mid 1940s were created by Antioch student Elizabeth Morss Graff.

The theatre was purchased by the Art Theatre Guild of Scottsdale, Arizona, and became the Little Art Theatre in 1955. Ellen and Rod Hoover purchased the building in 1990. From 1987-1990 the Little Art was owned by Antioch College under the leadership of then college president Alan Guskin. From 1990 to 1997, the business was owned by Antioch College professor Jon Saari.

After managing the Little Art for twenty years, Jenny Cowperthwaite purchased the business in 1998, and served as Executive Director until 2020.

Fondly thought of as “The Little Theatre That Could” the Little Art continues its long history of showing the best in independent, foreign, classic, documentary and mainstream movies.