A transcript of Tim’s wonderful presentation that enthralled the audience can be found here: Tim Horn talk transcript. 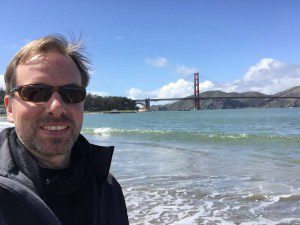 Tim Horn grew up in Yellow Springs and moved to New York City to attend the Cooper Union School of Art where his focus was graphic design. After graduation he worked in the field of design for over 20 years, first in New York and then San Francisco. During his career, he continued to explore a number of extracurricular creative pursuits including portrait photography, furniture making, and creating clocks and medicine cabinets from salvaged materials, before he finally found his ultimate medium of expression in oil painting. After a couple of years of regular plein air classes, he was completely hooked and phased out his design business entirely in 2006. With diverse subject matter that includes old buildings, classic cars, Airstream trailers, working ranches and urban street scenes, Horn’s paintings are as much about the subjects he paints as they are about the effects of light within a particular scene. His work is represented by five galleries, has won numerous awards, and has been featured in several magazines, including on the cover of SouthWest Art in 2012. He lives in Northern California and teaches painting workshops around the country and abroad.