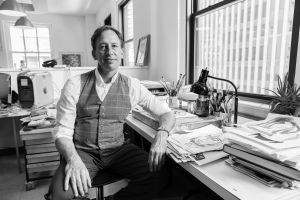 Tom Bachtell, a 1975 Yellow Springs High School graduate, creates distinctive drawings and caricatures that appear each week in “The Talk of the Town” and other sections of The New Yorker, where he has been a regular contributor for 20-plus years.  Tom’s work is seen in many other national and international publications as diverse as Entertainment Weekly, Forbes, Mother Jones, and The New York Times. In addition, Tom illustrated the cover of Trump and Me, a book-length profile by Mark Singer, and created a portrait of Ruth Bader Ginsburg for “Notorious RBG: A Portrait in Song,” a new release from Cedille Records. In addition to being an artist, Tom is a pianist and swing dancer.

Here is the wonderful riff  about Yellow Springs that Tom wrote and shared that evening. It was was a huge hit as evidenced by the roaring applause. The slides he showed along with his presentation are represented below by parenthesis. 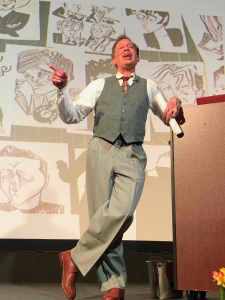 In 1972, my father joined up with Chuck Colbert in Yellow Springs and started the Wright State Radiological Laboratory, (Antioch main building) and we were transported to the big little universe of Yellow Springs. My parents were ecstatic. (Portrait of Arthur Morgan) I could tell they felt they had found their spiritual home. It was love for me and my siblings, as well. (Piano trio) A complete ecosystem, in the middle of Southwestern Ohio. (Yellow Spring) I fell in love with the place again and again. The town was so itself. It was so shaggy. And the water was awful. And the air smelled so sweet. And it had some kind of quasi-Utopian history. Owenites had established it. It was a stop on the Underground Railroad. (Hasser’s Barbershop) We arrived a few years after the protest at Hasser’s barber shop. (Antioch students on strike) Antioch students went on strike right after we arrived. My class was about half-African American. (Janice Johnson or Basketball team) Everyone was interesting. People lived with purpose. There was an 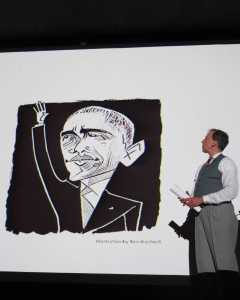 intentional community of Quakers in the Vale. There was Antioch. (Coretta Scott King) There was Coretta Scott King and Rod Serling. There were writers such as Virginia Hamilton and Suzanne Clauser. (geodesic dome) There were geodesic domes. The town was loaded with eccentrics, and what’s more, it celebrated them. We rented a glass house with a bamboo pit and a banana tree designed by Louise Odiorne. Louise was always on the march, and she was friends with Buckminster Fuller and Paolo Saleri. She had Utopian visions. She was building the House of Tomorrow, where our family would pick our own produce at the dining room table. Corrine Odiorne raised Pygmy goats in the back yard. (Jo Steinhilber) Read Viemeister practiced modern industrial design. People worked at Wright-Patterson Air Force Base. Or at Antioch. The Antioch Review published here. (me playing piano) My mother told me that if I wanted my hair cut, I’d have to do it myself. (Musician parade) There were German Anthroposophical families in town; Lotte Stave directed German 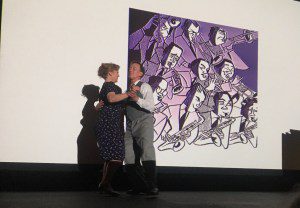 pageants at the Presbyterian Church. All the children played the violin or the cello. We sang MADRIGALS on the school bus on orchestra field trips. (George Washington Carver) My classmate Jan Graine’s father had studied with Dr. George Washington Carver. Eleanor Switzer drove around town with a camera, and took photos for the Yellow Springs News. Meinhard Robinow conducted longitudinal studies on the children of Yellow Springs. (Arthur Morgan and students) Arthur Morgan, the great man, sat in a rocking chair, while we played our instruments for him or read newspapers to him. (Shirley Mullins) Shirley Mullins tackled every child in her path and gave them a musical instrument. (Janice Johnson?) We played our violas and begged for money in 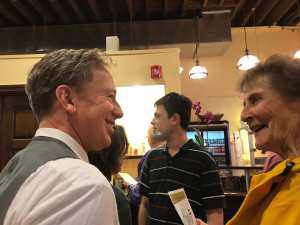 front of the Credit Union. My classmate Mike Childs won the national Punt, Pass, and Kick contest. Gabby made barbecue. The Bulldogs football team took the state championship. (Jewel Graham) Jewel Graham was the President of the YWCA. (Macs of 1975) Half of my class had enormous afros. Everybody wore bell bottoms. We all went folk dancing every Saturday night at Mills Lawn. We learned about the history of Gaunt Park, and that former slave Wheeling Gaunt, who purchased his own freedom, bequeathed to the village a large piece of land on its western side, requesting that the rent be used to buy flour for the “poor and worthy widows” of Yellow Springs. We took walks in the Glen at every opportunity. There was the Dead Bolt Gang, a group of organized separatist 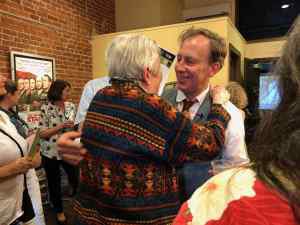 Lesbians, and Cernitin, which sold flower pollen for its health benefits. (Corvair) I learned how to jump in and out of a moving Corvair — the world’s most dangerous car — when Margaret Ebert drove by and offered a ride. When Margaret Ebert died, the Yellow Springs News devoted an issue to Margaret Ebert stories — what greater honor could there be? (roller skating?) I learned how to roller skate behind Sandra Lang as she slinked around the roller rink in Fairborn. I fell in love with whole families. The Bennings, the Robinsons, the Newsomes, the Colberts, the Johnsons, the Langs, the Rothmans, the Champneys. The Grotes. The Bents. The Pyles. The Agnas. The Maneris. The Hardmans. The Watsons. There was Gilbert and Sullivan at Center 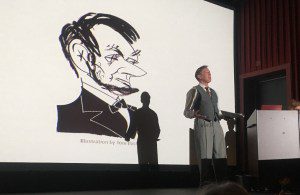 Stage. (Antioch Amphitheatre) There was Shakespeare at Antioch, where Arthur Lithgow staged the Antioch Shakespeare festival. I thrived in my academics at the high school. (Music Man) I was in “The Music Man” with Leon Holster at the Antioch Amphitheatre, and I was even allowed to choreograph a part of it. (Bill Mullins) There was the Antioch School. Yellow Springs schoolchildren spent a week staying up all night and sleeping all day at the Outdoor Education Center in Glen Helen. My mother worked at the University Without Walls. (The Benders) Everyone chopped their own Christmas trees at the school forest. There were accents in the air, twangy accents from the local farm kids, accents from away that can’t have been from around here, like Barbara Hardman and Bill Hooper and Jean Huston and Ruth Stewart and Doug Scott. And everyone went to concerts. And plays. I once told Jennifer Berman that I could not go to one more concert in Yellow Springs where someone got up at the end and said, “Well! Only in Yellow Springs!” But it was true. 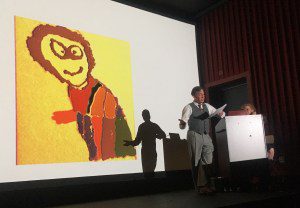 I felt as if the whole town was involved in helping me grow up — people listened and watched and encouraged and engaged. There was a distinct mindfulness. I saw it and felt it as a teenager. Vividly. And if you were here then, you probably did, too. It was in the air. It was our environment. It was tangible. It was something I could absorb and observe. There was the stuff of life here. It was potent material for a young person who could channel all that and synthesize it as an observer and satirist and cartoonist. Plus, I felt bathed in a kind of love and support that have lasted me my entire life. I suspect other people from Yellow Springs feel that, too, even if they move away from the village.”